The ozone layer or ozone shield refers to a region of Earth's stratosphere that absorbs most of the Sun's ultraviolet (UV) radiation. It contains high concentrations of ozone (O3) relative to other parts of the atmosphere, although still very small relative to other gases in the stratosphere. The ozone layer contains less than 10 parts per million of ozone, while the average ozone concentration in Earth's atmosphere as a whole is only about 0.3 parts per million. The ozone layer is mainly found in the lower portion of the stratosphere, from approximately 20 to 30 kilometers (12 to 19 mi) above Earth, though the thickness varies seasonally and geographically.[1]

The ozone layer was discovered in 1913 by the French physicists Charles Fabry and Henri Buisson. Its properties were explored in detail by the British meteorologist G. M. B. Dobson, who developed a simple spectrophotometer (the Dobsonmeter) that could be used to measure stratospheric ozone from the ground. Between 1928 and 1958, Dobson established a worldwide network of ozone monitoring stations, which continue to operate to this day. The "Dobson unit", a convenient measure of the amount of ozone overhead, is named in his honor.

The ozone layer absorbs 97–99% of the Sun's medium-frequency ultraviolet light (from about 200 nm to 315 nm wavelength), which otherwise would potentially damage exposed life forms near the surface.

The earliest Dobson Spectrophotometer was built in the mid-1920s by G.M.B. Dobson for the purpose of investigating atmospheric circulation by measuring changes in atmospheric ozone. This ground-based instrument measures column ozone by the technique of differential absorption of ultraviolet (UV) light with the sun (or moon) as a light source. By comparing the UV light intensity at wavelengths that are strongly absorbed and weakly absorbed by ozone, the column ozone content of the atmosphere is accurately determined. In addition to the 16 ESRL Cooperative Dobson Network stations, total column ozone is measured from about 80 sites around the world. Most of the Dobson instruments in use today have calibrations that are traceable to Dobson No. 83 that is maintained as the World Standard Dobson by ESRL as part of the World Meteorological Organization (WMO) designated World Dobson Calibration Facility.

The earliest record of continuing total column ozone observations dates back to 1925 at Arosa, Switzerland. This record and a number of other long-term measurements dating back 40 years have provided a valuable context for understanding ozone changes of the past two decades. They have also provided important continuity for a number of satellite-borne total ozone instruments that have been deployed in recent decades. Most of the ground-based total ozone instruments are part of the WMO coordinated Global Atmosphere Watch program.

For additional information on the Dobson instrument as well as data from the ESRL sites visit the ESRL website. 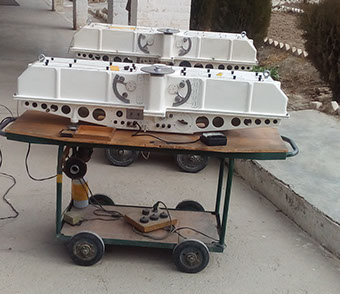 The Dobson Spectrophotometer at RMC, Quetta

OZONE TIMINGS THROUGHOUT THE YEAR IN RMC, QUETTA

I.   The technical inspection, repair, and adjustment of the instruments.

II.  Comparison of the Dobson spectrophotometers with the Regional Standard Dobson Instrument

No. 116, by simultaneous side-by-side observations on the Sun to determine the  existing

IV. Determination of new calibration constants for each Dobson spectrophotometer, as needed.

V.  To provide participants with instruction for operation of the Dobson spectrophotometers

and processing the observations at home stations, and sharing of knowledge concerning

the management of the ozone observing program.

The following national Dobson spectrophotometers and their operators participated in the DIC-T2006: